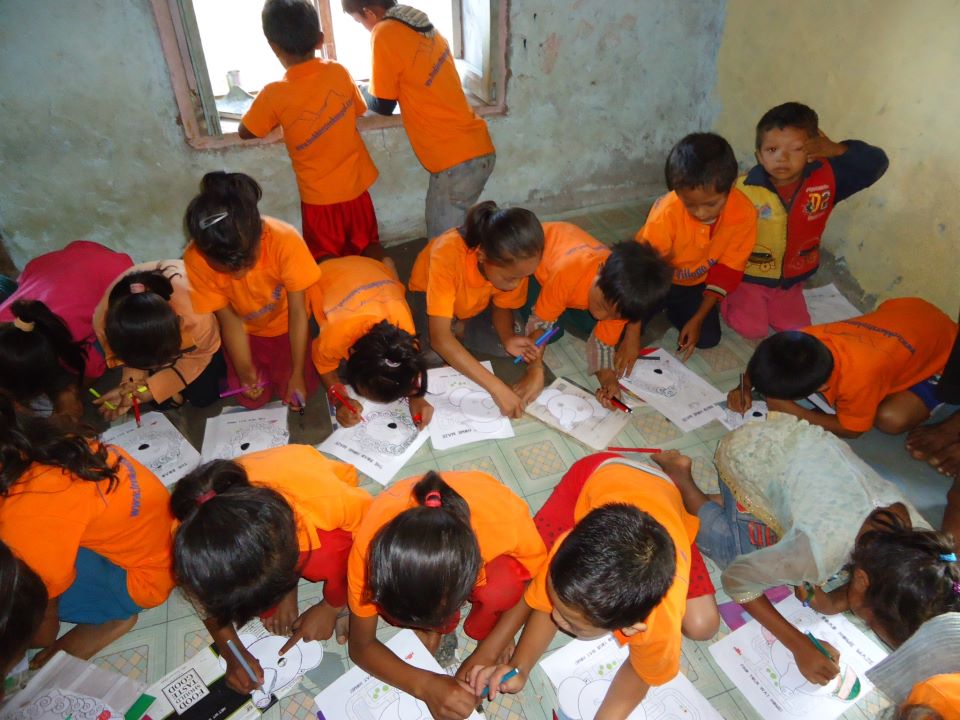 “My second volunteer experience was in October when I spent 10 days in Nepal with the Future Village Foundation visiting schools in Kathmandu and the small mountain village of Katunge in Dhading Province. I was able to get involved with this organisation through a work colleague, Jessie Lai, who first visited Nepal to go trekking in 2010 and has since been back 4 times to do volunteer work at schools, has set up Future Village Foundation (an Australian registered charity which aims to ‘to support the education of impoverished children in rural Nepal’), and now sends 4 teams of volunteers each year.

We were a small group of only 5 people (4 from Barclays) and although we didn’t know each other at the start we soon became close friends. Prior to our trip we spent time both fundraising and preparing teaching materials. Back in the UK my mother held a fundraising lunch in our village hall and raised £1,057.50 and I was able to make a surprise visit back to the UK to attend. It was a lovely day and great to see so much support back home. In Singapore we spent the weeks before planning our lessons. Luckily one of team, Lisa, was not working and she did an amazing job planning themes and putting together packs of materials and games for us to play with the children. We were very concerned about the content of what to teach but having now visited we realise that just spending time with the children, playing with them and helping the older children to practice their English was hugely beneficial.

We started the trip in Kathmandu and after a day of sightseeing spent 2 days at Snowlands School. All the pupils at this school come from the very remote Himalayan areas of Mustang and Dolpa. Once they come to the school (some as young as 3) they do not return home until they graduate. The conditions of the school, which is run by a Buddhist Rinpoche (holy man) who is based in Taiwan, was very basic – sanitation was a huge problem and we later were told some horrific stories of corruption and abuse of the children – however our first impressions were that the children seemed very happy and well educated. We were incredibly impressed by the level of English and general knowledge at all levels and the ambitions all the children had. However, sadly, despite their hard work and abilities few of them will fulfil their ambitions to be doctors, engineers and pilots. We spent time one to one with the oldest children and one of them told me how he wanted to be a writer but would most likely be a trekking guide – still an ambitious and sought after job in Nepal.

The second part of our trip took us to Future Village in Katunge. Future Village was founded in the early 2000s by Christy Lim, a Hong Kong graduate student who was carrying out her PhD field work in the area, and a local trekking guide, Dambar. It is a ‘learning enrichment centre’ which provides additional schooling before and after the children attend the government schools. The journey there was a lot less arduous than we had expected. The first 2-3 hours drive from Kathmandu were along the main road to Pokhara (Nepal’s second largest city, base for trekking the Annapurna ranges and home of the Ghurkas) which although well maintained was pretty hairy due to our driver’s extreme haste and refusal to give way to on coming vehicles while going round blind bends. At Dhading we changed into a four wheel drive jeep for another 1.5 hour trip up into the mountain. Previous groups have been larger and so driven up in open backed cattle trucks which have a tendency to break down but we were lucky and our journey was bumpy but relatively comfortable. As we drove higher up the mountains the beautiful Dhading Valley opened up below us and the Himalayas were clearly visible in the distance.

We spent 3 days there teaching lessons in the early morning (starting 6.30am) and early evening. On one day we visited our guide’s family home where goats and oxen wandered around the courtyard which formed the main living area of the dwelling and another day we spent in the library of the government school with each class visiting us in term. The library was well stocked with books supplied by Room To Read (another international organisation supported by Barclays) and decorated with murals painted by volunteers during Jessie’s first visit in October 2010.

The children we always full of energy running to Future Village from as far as 2 hours away while still getting there to start lessons at 6.30 just as dawn was breaking. They particularly liked music and dancing and physical activities so we taught them some dances and one particularly successful session was themed around the Circus. We had spent the evening before cutting out animal shaped masks which the children coloured in and then danced around wearing and making animal noises and actions. Another hugely popular activity was playing with the ‘parachute’ Lisa had brought. This is a large round piece of fabric made up of coloured triangles (like Trivial Pursuit pieces) which you float up and down and run underneath etc. It gave hours of fun and is also a useful tool to teach colours, numbers, teamwork and coordination. On our last morning we were treated to some traditional dancing and sent off with flower garlands and tikka dots on our foreheads.

Once back in Kathmandu our team dispersed. Lisa & I stayed on for a few days around Kathmandu and re-visited Snowlands School where we met an Australian group who also support the school who unfortunately told us of their concerns about corruption, poor sanitation and abuse showing us that while on the surface Nepal is a beautiful country and the Nepalese a friendly and welcoming people there is a darker side underlying the country which has only recently emerged from a decade long civil war and is one of most impoverished nations in the world.

Lisa and I finished our trip by spending 2 days in the tranquil Kathmandu Valley at Paulines Guesthouse. Although only 9km from the centre of Kathmandu we were surrounded by beautiful farmland and backed on to the forests of the Shivapuri National Park. The guesthouse is in a converted farm built in a traditional style and run by a French lesbian couple (both called Pauline) who cook the most fantastic French food (a welcome change from a week of very bland Dhal Bhat (lentils and rice)). It was the perfect place to relax and unwind after our hectic week at the schools although we did find time on the afternoon we arrived to go into the fields surrounding the farm to help the local families with the harvesting and threshing. We were kindly given some of their rice beer to drink which, although I don’t usually drink, was relieved to find tasted very fermented as it is made just from the dirty river water so at least the alcohol killed the bacteria and we were free of stomach problems!

It was a wonderful trip and an amazing experience. I will definitely be maintaining my links with Nepal and Future Village and will be doing more ‘voluntourism’ holidays as it is a fantastic way to experience aspects of a country you would not otherwise be able to and make great friends along the way.”

Help us spread the word by sharing: